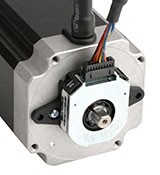 Mclennan is pleased to announce Applied Motion Products, Inc introduction of a new encoder feedback option for NEMA 17, 23, and 24 frame stepper motors. These new incremental encoders are built upon a technology that utilises capacitive reactance to generate digital signals for speed and position feedback in the motor and drive system. Capacitive encoders offer advantages over other encoder types, including resistance to environmental contaminants such as dust and oil. Modular capacitive encoders also have thin profiles and are competitively priced.

New CAA type capacitive encoders can be added to all NEMA 17, 23, and 24 frame step motors from Applied Motion Products, providing the same enhancements to system performance as existing WAA, YAA, and ZAA encoder options. To simplify product selection, a select group of the most popular step motor part numbers have been pre-configured with these new encoder options. A list of those part numbers is shown below.