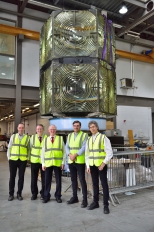 The Commissioner for Irish Lights is a key maritime organisation tasked with delivering essential safety around the coast of Ireland, providing aids to navigation (AtoN) through modern digital services such as GPS and Radar as well more traditional resources including lighthouses, buoys and beacons. As part of a continuous drive to minimise running and maintenance costs as well as reduce its carbon footprint, renewable energy sources such as photovoltaic solar power, batteries for energy storage and low-energy LED light sources are used extensively for remotely located installations. Now, Irish Lights has turned its attention to increasing the efficiency and reliability of its lighthouse drive train technology and Mclennan’s systems integration team has recently supplied a novel custom designed motion control system that drives a 5,000 kg lantern optical system at a constant speed from a 24 V battery source.

Mclennan were involved from the outset of the project and as part of its technical review procedure began work on a proposal that that would meet Irish Lights’ demanding specification and provide a long life, low maintenance and cost-effective solution for its unmanned lighthouse on Tory Island – some nine miles (14.4 km) off the north-west coast of County Donegal. The specification called for a complete cabinet-housed control system and two separate gearmotors driving large pinions that permanently engage a three metre diameter geared slewing ring and bearing system that supports the six metre high lantern optics. Each gearmotor also required an integral freewheeling clutch to provide a redundant solution where one drive is powered and the other unpowered drive acts as a backup, with controlled switching between the drives to maintain optimum operational life.

Application sizing calculations for the 5,000 kg lantern optics revealed a load inertia in excess of 10,000 kgm2. Other factors included a continuous load speed of around 14 rpm, acceleration time between 60 to 300 seconds plus slewing-ring gear efficiency and bearing friction. When considering battery power and the unmonitored and continuously running system requirement, a formidable challenge was set and the choice of motor and mechanical technology would be critical.

The control system specifications covered motor performance, battery condition and related I/O processes, in addition to the management of the gear lubrication delivery system. Irish Lights preferred a control system with visual indicators for critical functions. This type of control was in consideration for straightforward operation and a reasonable overall system cost. As a motion control system integrator and component supplier with in-house design capability, Mclennan works with a select number of globally recognised motion control component manufacturers and is able to match its customer’s requirements with cost effective solutions. Mclennan’s long experience in customised solutions and knowledgeable technical team were put to the test for this application.

A motion control system based around a brushless servomotor was an obvious choice to ensure precision speed and maintain a long and reliable motor life. For convenient and compact installation, an integrated brushless servo motor with built-in encoder, servo drive and intelligent motion controller was chosen from Mclennan’s distribution partner JVL Industri Elektronik A/S who pioneered this technology and today leads the field. A 400 W version with 24 – 48 V DC power and RS 485 communications is part of a comprehensive product range that extends to a wide choice of communications and servo feedback options. This distributed control solution also minimises cabling between the motor control and the control cabinet in the lantern room where space is at a premium.

The control cabinet’s external wiring requires only the DC supply for the motor power and grease dispensers plus communication to the integrated drive along with minimal low-voltage instrument cabling for I/O and sensors to-and-from the stationary side of the lantern platform. Overall control of these functions in conjunction with time-outs and safety procedures are fulfilled by a proprietary ARM 32-bit microcontroller programmed by Mclennan’s systems engineers. Status derived from current sensing for correct motor speed, motor failure, grease dispensing and well as sensors for platform rotation faults are routed via a relay network to indicator lights on the control cabinet door and used for monitoring purposes along with LCD displays for motor current percentage, on/off and emergency stop. RS485 programming ports used for controller communication provides speed and torque updates along with other essential factors for safe operation. During the design phase of the project Mclennan developed a C++ diagnostic and commissioning front-end for the ARM controller which proved extremely useful, and whilst not part of the terms of supply has been retained by Irish Lights for future troubleshooting and use on forthcoming lighthouse upgrades.

For the drive mechanics, two low-backlash planetary gearboxes were mechanically coupled as a single rotary servo-actuator to provide the required torque and speed characteristics for the application. With a final output speed of around 14 rpm and the stringent acceleration torque and generous safety margins accounted for, Mclennan selected NP series 015 and 035 gearboxes from its distribution partner WITTENSTEIN alpha, the German developer and producer of mechanical and mechatronic drive systems. These high efficiency gear units, with 70 and 120 mm nominal diameters, provided 10:1 and 20:1 ratios respectively, and the two-part assembly was complemented with a servo flange output and a Mclennan-designed shaft adapter for the drive pinion. The free-wheel clutch was also integrated into the assembly. The acceleration torque reflected back to the MAC402 series servomotor was less than 5 Nm. The motor current consumption from this short term torque and the much lower continuous torque was exhaustively tested and proven to be well within the power specifications for extended use from the battery supply.

The wall mounted control cabinet was specified in stainless steel and all components met IP protection requirements for a marine environment although the lighthouse’s lantern room afforded a relatively normal ambient environment. The system was delivered to Irish Lights and fully tested at its Dublin headquarters with Mclennan engineers present. Final commissioning on Tory Island fwas completed in October 2017 and the system is running perfectly with several more planned for further lighthouse upgrades.