Mclennan has recently completed the design and supply of a particularly challenging motion control system for the Science and Technology Facilities Council’s (STFC) Daresbury Laboratory, as part of the research council’s funding and collaborative support of the Advanced GAmma Tracking Array (AGATA). With its objective to build and operate the ultimate gamma ray tracking spectrometer, AGATA is a partnership of over 40 institutions from 13 European countries that collaborate and share exciting research that will produce the most valuable understanding of the structure of atomic nuclei ever realised. At detection levels that are one thousand times more powerful than previous systems, the globe-shaped instrument will be transported and used across several European beam accelerator facilities for applications that will advance many areas of research including medical imaging and environmental monitoring.

Mclennan’s work on the project with Daresbury Laboratory, which is located at Sci-Tech Daresbury, involved the design and supply of single axis servo-controlled motion system for the precise rotary positioning of the sensor array holding frame that guides and supports a matrix of encapsulated high-purity and highly fragile germanium crystal detectors. Mclennan had been involved in two earlier iterations of the AGATA project which has run for several years. The earlier motion systems were simpler and more traditional than the on-axis drive required for this latest holding frame design which measures approximately 2.5 metres over its largest diameter and weighs 7.5 tonnes when fully loaded with a complement of up to 180 large detectors. 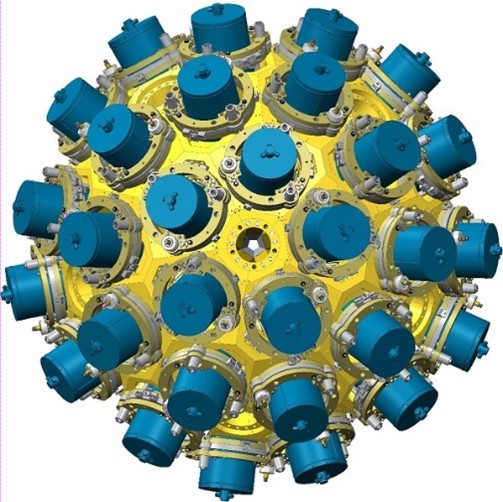 The closed loop motion system needed to be applied through an existing slew ring gearbox that forms part of the holding frame’s power transmission mechanics and includes a large drive shaft supported on two bearing blocks. With such a large mass and an equally large total system inertia - plus the problems of lost motion/hysteresis, backlash, and compliance through the combination of the slew ring gearbox and bearing arrangement – accurate and stable rotary positioning for this huge spherical structure would present challenges for Mclennan. These challenges were compounded by the specification requirements and choice of technologies for the additional gear unit components and servo system performance. 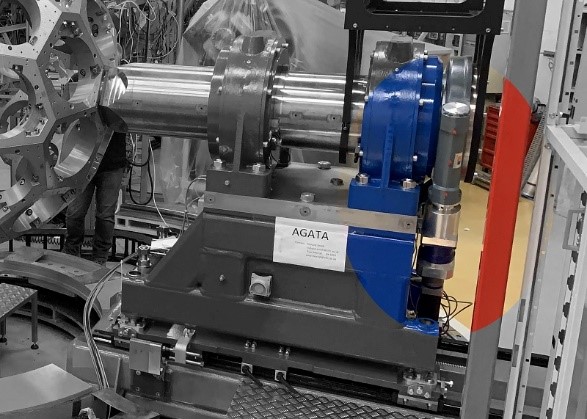 Other design criteria included a requirement to use a stepper motor as part of closed-loop motion system which through its characteristic holding torque had proved to be more stable in earlier projects. STFC had already specified and included a Renishaw RESOLUTE™ series BiSS® C 26-bit absolute encoder to form a part of the closed loop motion system. This modular tape and reading head optical encoder system was placed around the outer diameter of the slew ring gear assembly to directly monitor the actual angular position of the load. The 26-bit resolution provided more than adequate angular positioning and accuracy capability with Mclennan’s servo system.

To maintain a stable closed loop system, reflected load to motor inertia matching is fundamentally essential and to suitably pair the huge inertia mismatch, avoiding a large, unwieldly and costly motor solution, Mclennan worked with its distribution partner Wittenstein to integrate two precision gear units that together provided an 80:1 reduction ratio. Wittenstein’s SP140S series at a 10:1 ratio and its NP025 series at 8:1 are inline planetary gear units that were supplied as a single assembly. This compact gear unit combination allowed the use of a comparatively small 34 NEMA frame stepper motor to adequately power the massive holding frame. With the reflected inertia taken care of and the closed loop to the load-located absolute encoder a critical factor, Mclennan specified a TXM34Q series StepSERVO™ integrated stepper motor from another of its distribution partners, Applied Motion Products.

StepSERVO technology combines the high torque capabilities of a step motor with the closed loop dynamic control of a servo system as an all-in-one housed solution. This drive solution features a digital drive, a motion controller and a selection of control and bus communications interfaces. Servo feedback is normally achieved through an internally housed encoder, however for this project Mclennan’s own PM1000 series digital servo controller managed closed loop control with the absolute encoder, outputting step and direction pulses to the TXM34Q integrated stepper’s control interface. The PM1000 was modified with special firmware to accommodate the BiSS C absolute encoder interface. Overall control for the handling frame was manged by STFC’s supervising PC through motion commands to the PM1000 via RS232. Mclennan also interfaced a jog box to the PM1000, allowing manual control as part of the requirement specification.

The complete control system was housed in a 4U, EMC compatible 19-inch rack enclosure, complete with power supplies. The TXM34Q integrated servo included M12 connectors for all interfaces and all interconnecting cables were supplied for integration with STFC’s cable management system. The commissioning of the system was remotely guided by Mclennan engineers as the delivery requirements fell into COVID restrictions – normally all on-site commissioning and training is part of Mclennan’s terms of supply.