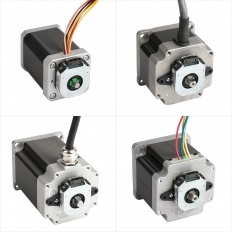 Whilst stepper motor based motion control systems are inherently open loop, more and more applications require the added security and peace of mind provided by encoder position feedback where lost motion might be problematical. Mclennan addresses this need through a wide range of microstepping drives and compatible motor systems from AMP that provide position verification and/or eradicate stall problems for improved performance. Up until now optical encoders have been available as the feedback components of choice but AMP has recently announced this new range of competitively priced capacitive encoders for use on its NEMA 17, 23, and 24 frame stepper motors.

The analogue characteristics of the capacitive-reactance technology used in these new encoders is converted into digital pulses for speed and position feedback and as such offer the same electrical output as their optical counterparts, so that no difference is required for matched microstepping drives. With 2000 pulses per rev available as standard and with a nominal 5V signal level and A+B & Z channels, the encoder is easily integrated across all of the AMP intelligent microstepping drives that offer stall detection or position verification.

In applications where dust, oil, and other contaminants may be present optical encoders can be susceptible to signal level degradation or signal loss whereas capacitive sensors are generally more robust and unaffected in these environments. AMP’s capacitive sensors are pre-assembled onto rear shaft of the motor and with a thinner profile than the optical encoder equivalents a small amount of axial length saving can be achieved in very space restricted installations.